The origin of the modern English name Halloween can be found in medieval Christianity. Halloween, short for All Hallows’ Eve, is observed on October 31, the night before All Hallows’ Day, a Western Christian holiday. It marks the start of Allhallowtide, the season of the liturgical year that commemorates the saints, the martyrs, and all the departed. To celebrate this festival, people dress up in a variety of costumes, go trick-or-treating, and carve jack-o’-lanterns out of hollowed-out pumpkins around this time. When kids dress up for trick-or-treating, they frequently wear ghost and witch costumes. 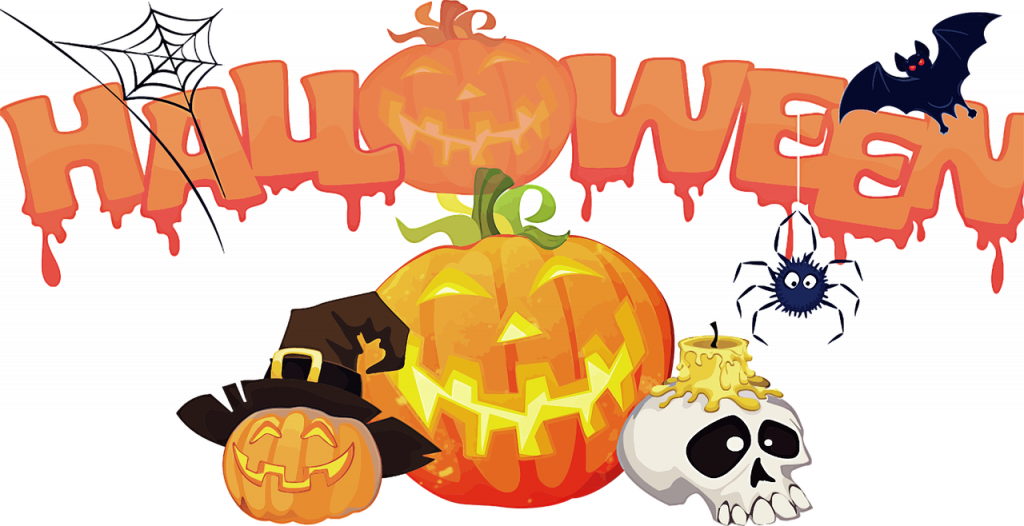 Origin and History of Halloween

Samhain, a festival celebrated by the Celtic people of ancient Britain and Ireland, is where Halloween began. This festival occurred at a critical time of the year when seasons changed, but more significantly, people claimed the veil between this world and the hereafter was particularly thin, allowing them to communicate with the dead. Halloween acquires its “haunted” image from this as well. People believed that the dead visited their houses during the Samhain celebration. Additionally, those who passed away over the year were thought to travel to the afterlife.

People would build bonfires on hilltops to scare away evil spirits and relight their home fires to save themselves from the harsh winters. They would also occasionally dress strangely to disguise themselves and avoid being identified by the ghosts they believed to be around. Practices like these led to the association of mythical characters like witches, hobgoblins, fairies, vampires, zombies, demons, etc., with Halloween.

What are the aspects of an ideal Halloween night? A full moon, an overcast sky, a chilly wind, and tales of mythical and eerie creatures we pray we never have to face! Many Halloween customs that have persisted over the years feature some of the most horrifying monsters and creatures. Witches, ghosts, vampires, werewolves, goblins, and other supernatural creatures become more active during the Halloween season.

The following classic Halloween monsters will help you brace yourselves for the start of the spooky season.

Count Dracula is a Legendary Monster and one of Halloween Horror Nights’ most fearsome vampires. One of the most well-known fictional characters in history, Dracula is a common choice for a Halloween costume because of his long history of popularity.

A zombie is an undead person with characteristics dissimilar to living beings. They have a destructive mentality and terrifying appearance. Zombies are almost indestructible and can only be controlled by damaging their brains. Zombies are scary and fearsome, which makes them an ideal Halloween character.

An antagonist in Stephen King’s horror novel, Pennywise is a gruesome clown. After the release of the horror movie IT, there was a sharp rise in demand for Pennywise costumes for Halloween. His grin is creepy, and his stare sends chills down the spine. Truly, one of the best Halloween characters!

Halloween is associated with the horror genre, but our little friendly ghost Casper is anything but scary. Casper is friendly, helpful, and kind. Even though he does not fall into the category of fearful characters, he makes a deserving contender for Halloween costumes due to his uniqueness.

Mummies are undead creatures that appear to be wrapped in bandages. They are frightening figures that do not resemble or exhibit living behavior. Mummies are classic choices for Halloween costumes as they are easy to prepare and possess scary visuals.

Werewolves are mythical creatures that come to life when a wolf bites a human on a full moon night. They are dangerous and terrifying because of their inability to think like humans after transformation. Werewolves have always been popular in pop culture and a great Halloween costume choice.

No! Pumpkins aren’t scary. But what else represents Halloween better than the pumpkins? As per history, Pumpkins are known to symbolize Halloween due to their abundant harvest in that season. Jack o’lantern costumes for kids are available everywhere.

The Minions are tiny, round, yellow animals with one or two eyes. They are goofy beings known for speaking gibberish. Bananas and apples are two things that minions adore, along with having fun.

These heroines are the central characters of Disney movies. There are a total of 13 members as a part of this category; Snow White, Cinderella, Jasmine, Ariel, Belle, Aurora, Rapunzel, Pocahontas, Merida, Mulan, Raya, Tiana, and Moana.

Anime are animations that usually originate from Japan. Over the years, the popularity of anime characters has skyrocketed, and people choose to dress up like their favorite anime characters. Some popular ones are Goku, Kakashi, Kaneki Ken, Satoru Gojo, Luffy, Sailor moon, etc.

Baby Yoda (real name: Grogu) is a toddler that belongs to the Yoda species. He is one of the most popular characters in recent times and is even cited as ‘2019’s biggest new character’ by The Guardian. He has Yoda’s signature greenish skin and long, pointy ears.

The Mandalorians are fearsome warriors who are a part of the star wars universe. Thanks to the widespread popularity of the series, the Mandalorian cosplay is one of the most common sights on Halloween in recent times.

Fairies are magical creatures who have the power to make the world a better place. Winx club is a fictional group created by fairies who possess extraordinary magical abilities and a strong bond of friendship. It is an ideal Halloween costume for little girls who believe in the power of magic.

Ghostbusters are people who work for a ghost removal service. They are brave people who aren’t afraid of ghosts and protect the world from their mischief. The hero attribute makes the ghostbuster costume an ideal preference for Halloween.

The festival of Diwali symbolizes the victory of light over darkness. It reminds us that the power of knowledge, wisdom, virtue, and optimism is of supreme value. Numerous rituals, values, stories, and learnings are associated with this festival. As Diwali nears, the excitement levels of kids surpass their limits. They anticipate this festival with baited breaths because of new clothes, delicious snacks and sweets, astonishing firecrackers, precious gifts, and whatnot! We have some creative activities for kids that are excellent for adding benefit, quality, and supremacy to your children’s lives. Through these activities, you will enhance the creativity of your kids multifold and expand their knowledge base by sharing insights about culture, traditions, and religious beliefs.

Importance of festivals in children’s lives

The spirit of festivities makes people unite and celebrate culture and traditions. Along with a means of commemorating cultural heritage, festivals provide an opportunity to create new memories. Different cultures have diverse festivals, but the joy and enthusiasm are the same. For adults, celebrations are a way of taking a break from monotonous routines, re-live nostalgic memories, and keeping their traditions alive. Festivals have always been a means of savoring beautiful moments in life for adults, but what about children? What is the importance of festivals in kids’ lives? Well, for kids, this is the perfect time to learn and enrich their lives with knowledge. Through festivals, kids are exposed to the value and significance of relationships and cultural heritage, all while having fun. Thus, child experts strongly recommend that parents introduce their kids to diverse rituals of the festivals and involve them in celebratory activities.